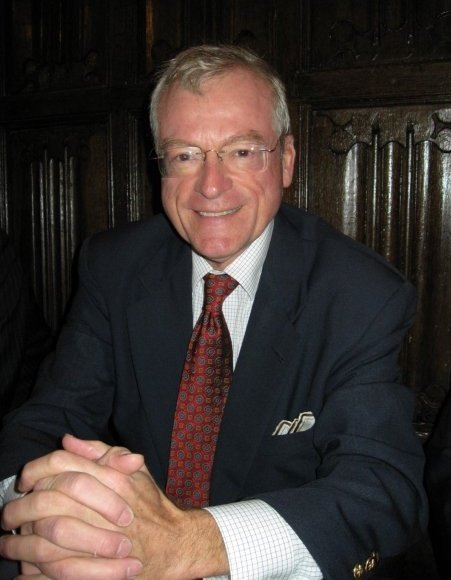 The James Monroe Museum got its start in 1927 when 5th President James Monroe's great great grandson, Laurence Gouveneur Hoes and his mother, Roses Gouveneur Hoes purchased the land in   Fredericksburg which was the site of James Monroe's law office in the 1780s. Over the years, Laurence Hoes worked with the citizens of the Northern Neck on plans to develop the old Monroe Farm. Thomas was present on behalf of the Foundation in 1987 when Army Secretary John O. Marsh, Jr. participated in the Birthplace Commemorative Program. Thomas's work with the Foundation began in 1986, when he    was elected a Trustee and nominated by the Foundation to the Governor for appointment to the Museum and Library Board. After appointment by Governor Baliles, Supreme Court Justice Lewis Powell swore him in. More recently he has worked with citizens and organizations on plans to restore and rebuild the historic Monroe Farm and helped to create and Educational Center for the 250th Birthday of James Monroe.

With more than 35 years experience in Federal, State and local government in both the executive and legislative branches, Thomas devotes most of his time to volunteer activities. He began his government service career working in the Senate of Virginia, and the Division of Legislative Services. Later, he worked in the United States Senate, Federal Insurance Administration (now part of the Federal Emergency Management Agency) and Housing and Urban Development Department. In 1980-1, he was a Legislative Affairs Specialist for the National Aeronautics and Space Administration.

After the first Space Shuttle was successfully launched in April, 1981, he was appointed the Senior Assistant for Legislation for the U.S. Department of Housing and Urban Development, where he was in charge of legislation relating to the community planning and development programs and Enterprise Zones. In January, 1984 he was appointed Director of the Virginia Office of HUD where he served until 1990. During his service in Virginia, the first public housing in the nation was sold to tenants, he pushed for more affordable housing and cut government expenditures to carry out federal programs in the most effective, efficient and least costly way possible.

He attended Randolph-Macon College and VCU.    He served as President of his class at  VCU and received his B. A. in History and Political Science (and with Leadership and Service Honors) from Virginia Commonwealth University, 1973.  He is a lifetime member of the VCU Alumni Association.    He earned a  M. A. in Government (Public Administration) from The George Washington University in Washington, DC. In 1981, he received his Juris Doctor degree from George Mason University School of Law.   In law school , he was the founder and Magister (President) of the Lewis F. Powell, Jr. Inn of Phi Delta Phi International Legal Fraternity.

In 1988, he was honored at the Founders Day Program at Hampton University with the President's Public Service Award.

From 1990-1993, he served as a Visiting Scholar and Professor at Virginia State University and following that had a number of senior level government assignments in Washington, DC, Pittsburgh, PA, and Philadelphia, PA.  In 1998 he was a team leader for the selection panel to the Empowerment Commission for Designation of Empowerment Zones. Portsmouth and Norfolk were selected that year as a joint zone.

In addition to his work with the Monroe Foundation, he has served a number of years as  President of the Friends of the Virginia State Archives (and formerly served on the Board of the Library of Virginia),   Vice President of the Manchester Civic Association (now in a State and National Historic Landmark District), and  four years on the Board of the Richmond Habitat For Humanity and service as Secretary and Board Member of St. Andrew's School Board.   He has served seven years as Chairman of the Electoral Board for the City of Richmond and is now Secretary. In 2000, he served as a member of the Virginia Electoral College (and temporary chairman).